Candi – It Doesn’t Get Better Than This!

Candi’s vehicle placement was made possible by the wonderful folks at Family Tree, who referred her to Hands, and Galloway Company, Inc., who helped sponsor Candi’s placement. Thank you to both wonderful groups of folks for sharing the vision of organizations working together to provide hope, along with long lasting meaningful support in many more ways than we could individually!

Candi is a grandmother who has raised her grandson on her own since he was four months old. Tristen is now eleven years old, and refers to Candi as his mom, and visa-versa, she refers to him as her son. Candi has been with the same company for over 18 years and currently works as an internet manager for a vehicle truck and van dealership.

Though she is in the vehicle industry, her experiences with vehicles had not gone so well. The 2016 Fiat, she had financed caught on fire and was destroyed. Candi was still paying the balance on the loan. In the meantime, her employer offered a 2003 Cadillac with 234,000 miles for $100 as a short-term solution.

In July, 2020, Candi experienced the loss of her mother who was at the age of 95 years old when she passed away. They had both shared in the rent for an apartment. After losing her mother, she could no longer keep up with the cost of rent on her own. Tristen and Candi ended up staying at a hotel for a short period of time. When they could no longer afford to pay for the hotel room, they ended up living in their vehicle.

The Englewood Homeless Liaison from Tristen’s school found out about their situation and connected them to Family Tree. She was so grateful when Family Tree was able to provide them with a room at their community living housing. In addition, Candi’s vehicle was breaking down and she was concerned the car was not going to last.

Family Tree had been working with Galloway, a Civil Engineer company who wanted to sponsor a vehicle for a single mom. Soon after, Hands of the Carpenter partnered with Galloway and Family Tree to help provide a vehicle for Candi. When she found out about the news, she was over taken by the amount of support she received from Family Tree, Galloway, and Hands of The Carpenter. She could not be more excited to have been selected to receive a vehicle.

On May 18, 2021, Candi was placed with a 2007 Ford Edge vehicle at Galloway’s in Englewood. She was overjoyed and thankful for all the support and love shown from Galloway’s team, Family Tree and Hands of the Carpenter.

Thanks to everyone who helps Hands of The Carpenter provide hope through transportation! Your generosity via gifts, car donations, volunteer hours and more allow us to reach more local women in need.

Ways to get involved:

Donate a Car
Give to Hands
Volunteer With Us 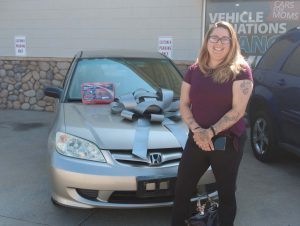 Hope – Time Is of the Essence

Hope is not only a name of a person, but it also means, desiring a positive outcome that will bring change. As 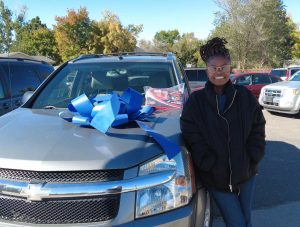 Brooke and the Honey B’s

Brooke is a single mom of two children, Bria (age 5) and Brice (1). She refers to her children as the Honey 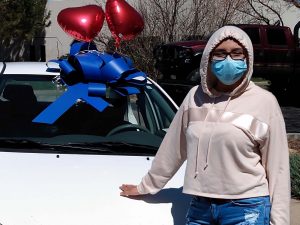 Mackenzie is a young single mother of two children – ages 3 and 2 months. In October of 2020, Mackenzie decided to